Berrys Bay has been locked away from the public and under the threat of massive development for over a decade. The NSW Government is committed to revitalising and reopening this beautiful and historic harbour foreshore as an open public space.

The area is steeped in history, including as home to a thriving maritime industry from the 1870s to 1930s and home to the Quarantine Launch Depot for most of the 20th century.

Over the next few years, Berrys Bay will be used as a temporary construction site to support tunnelling work for the Western Harbour Tunnel project. We have listened to the community and, once construction is complete, the Berrys Bay foreshore will be returned to the public as open space with new Government-funded facilities for locals to enjoy.

The NSW Government has taken the first step in unlocking the Berrys Bay foreshore by handing over the dormant quarantine buildings to North Sydney Council with a requirement for community open space.

A Community and Stakeholder Working Group with representatives of the community, along with key stakeholders and independent experts, has been formed to provide community input into the future of Berrys Bay following the construction of the Western Harbour Tunnel.

A community-led vision will explore the potential opportunities to unlock and create a vibrant Berrys Bay, accessible to all. 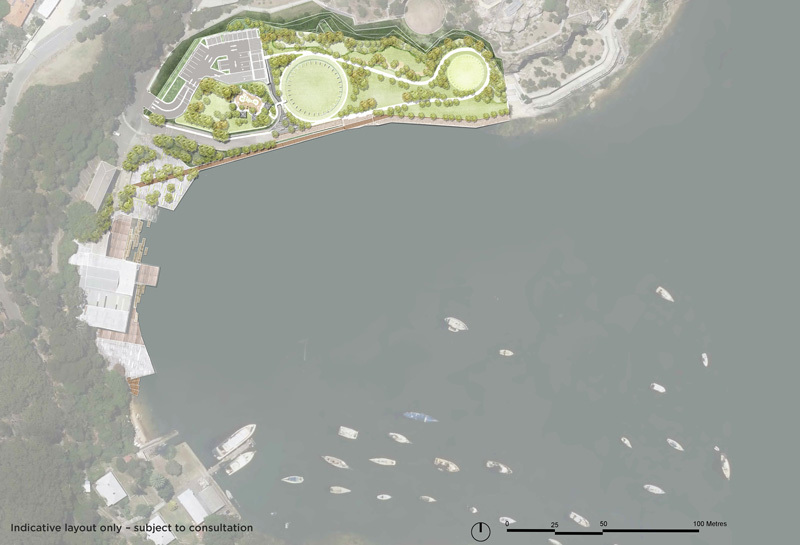 What community consultation has been undertaken?

Representatives of the community have been appointed to be part of a Community and Stakeholder Working Group established by Transport for NSW.

The Working Group will help shape the future of Berrys Bay and guide its transformation into a thriving harbourside public precinct while respecting its heritage and character. It will also help the Government to reflect community and stakeholder interests in the future of this area.

The Working Group has been established via an Expression of Interest process held from 24 October to 6 November 2020. This group is comprised of a diverse range of community and stakeholder groups interested in or impacted by future uses of Berrys Bay.

There are already some great ideas around connecting existing parkland and open space, such as a continuous connection from Carradah Park through Berrys Bay to Balls Head. The Working Group will take on board these and other community views while also considering the possibility to attract place activation like cultural or food and beverage opportunities.

There will be ongoing opportunities for community members to share their views. The Working Group meets frequently to share information and ideas for the area, and Group members liaise with their local community groups in between meetings.

For more information on the role and responsibilities of the Working Group, see the Group’s Code of Conduct and Terms of Reference.

How will the construction of the Western Harbour Tunnel and Beaches Link impact Berrys Bay?

Once construction is complete, the NSW Government is committed to returning Berrys Bay as a public open space, with new facilities funded by the NSW Government. Transport for NSW is engaging with the community and seeking their input through the newly established Community and Stakeholder Working Group to help design and shape the future of Berrys Bay.

For more information and the latest updates on the Western Harbour Tunnel and Beaches Link project, visit https://www.rms.nsw.gov.au/projects/western-harbour-tunnel-beaches-link/index.html

What is the Berrys Bay Master Plan, and why is it being prepared?

As part of the NSW Government’s commitment to creating new public open space, Transport for NSW is leading the master planning process for Berrys Bay.

The Berrys Bay Master Plan, when finalised, will set out the vision, future uses and strategies for restoring the Government-owned land at Berrys Bay, following the use of Berrys Bay as a temporary construction site for the Western Harbour Tunnel.

The Master Plan is prepared as a document that articulates a vision and roadmap for transforming Berrys Bay into a green, open space with facilities that meet the current and future needs of the people of NSW.

While ensuring a community-led vision for the area and exploring the creation of a space that reflects the area’s cultural and heritage significance, the Master Plan will also address any technical constraints. Early site investigations are underway to conduct technical studies to understand the area better.

The Master Plan concepts will be released for community and stakeholder review, followed by a public exhibition of the draft Master Plan. The draft Master Plan will be reviewed and revised based on community and stakeholder feedback from the public exhibition. This revised draft plan, along with costings and a construction schedule, will then be submitted to the Minister for Planning and Public Spaces for final determination.

What is happening with the old Quarantine Depot site?

The NSW Government has taken its first step in unlocking the Berrys Bay foreshore for public use with the transfer of ownership of the Quarantine Depot site to North Sydney Council.

The 2,185m² site on Balls Head Rd, Waverton, featuring two locally heritage-listed cottages and access to the waterfront, will be sold to the Council for public recreation and community use.

The sale of the dormant site, which was once used as a depot to serve the Quarantine Station at North Head, enables the Council to progress plans to open up the foreshore, supported by the NSW Government’s investment in the broader precinct.

Under the sale agreement, the NSW Government will carry out any necessary remediation work to ensure the land and buildings are safe for future uses. The NSW Government also stipulated that the Council reserve the area for community open space for at least 15 years.