Western Harbour Tunnel and Beaches Link is a major transport infrastructure proposal that will make it easier, faster and safer to get around Sydney.

Heavily constrained routes to the CBD through our local community impact on road users and commuters, particularly along Military Road, which is regularly listed among the most congested roads in Australia.

Western Harbour Tunnel and Beaches Link is a key initiative for Sydney’s integrated transport network. It will take pressure off the Sydney Harbour Bridge and Tunnel, relieve congestion on Military Road, reduce the use of local roads for rat runs, and improve public transport reliability and connectivity.

Beaches Link will divert cars and buses from Military Road, Ourimbah Road, and local rat runs in our community by offering Northern Beaches motorists an alternative route to connect into the CBD and beyond. It includes over 11 kilometres of tunnels as well as upgrading over five kilometres of surface roads. A new tunnel will be built under Middle Harbour, connecting into the Western Harbour Tunnel at the Warringah Freeway.

Western Harbour Tunnel delivers a new crossing of Sydney Harbour, creates a western bypass of the Sydney CBD, provides an alternative way to get to Sydney Airport, and connects into WestConnex for journeys across Sydney. The project includes upgrading four kilometres of Australia’s busiest road, the Warringah Freeway.

The project will bypass 19 sets of traffic lights through The Spit, Mosman and Neutral Bay, and traffic on North Shore roads is estimated to be reduced by 40% on Spit Bridge and by 15% on Military Road.

Travel time savings from the Western Harbour Tunnel and Beaches Link are estimated at:

The project has been identified as an infrastructure priority by both the NSW and Australian Commonwealth Governments. It supports the NSW Government’s strategic objectives for Greater Sydney and delivers on recommendations made by Infrastructure Australia. 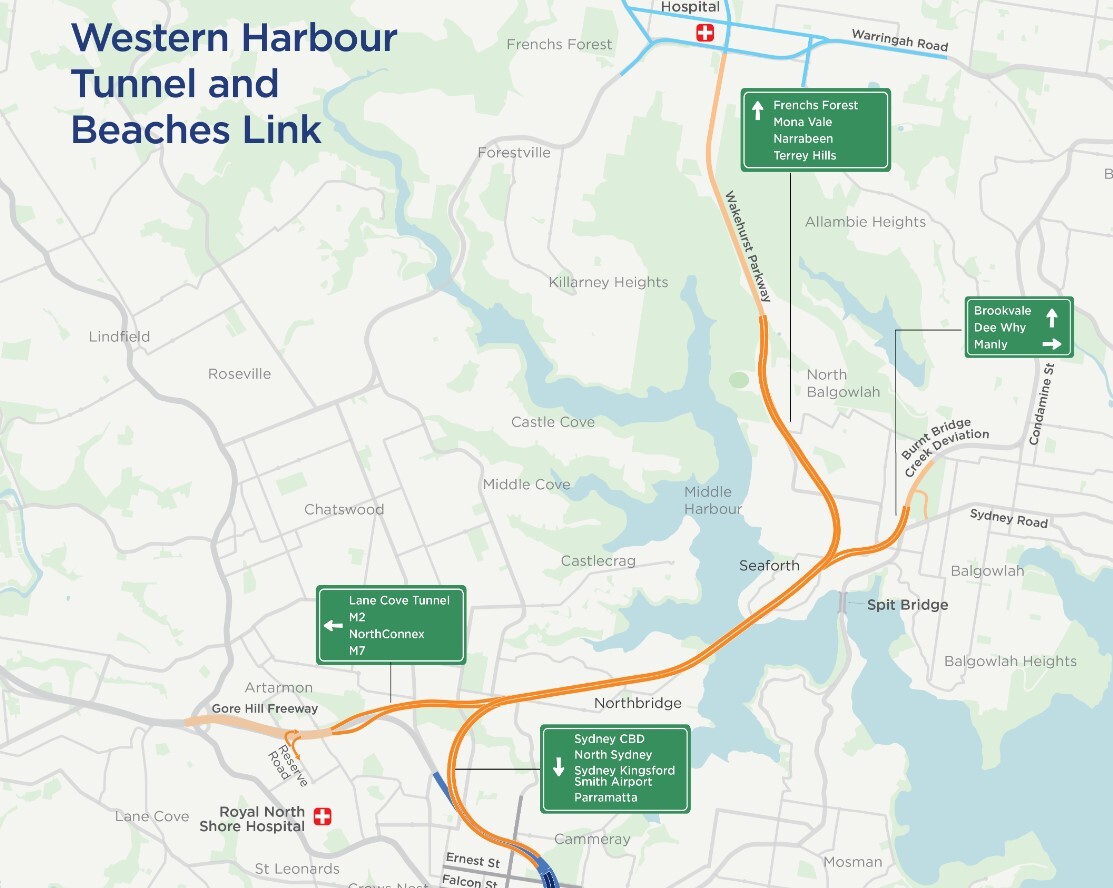 How will the project invest in a revitalised Berrys Bay?

We have listened to the community and will save Berrys Bay, returning this harbour foreshore to the public as an open space with new Government-funded facilities for locals to enjoy.

The NSW Government has taken its first step in unlocking the Berrys Bay foreshore with the transfer of ownership of the Quarantine Depot Site to North Sydney Council with a requirement for community open space.

A Community and Stakeholder Working Group with representatives of the community, along with key stakeholders and independent experts, has been formed to provide community input into the future of Berrys Bay following the construction of the Western Harbour Tunnel.

This Working Group will help the Government to reflect community and stakeholder interests in the future of this area. A community-led vision will explore the potential opportunities to unlock and create a vibrant Berrys Bay, accessible to all.

Has public transport been integrated into the project?

Western Harbour Tunnel and Beaches Link benefits public transport across the North Shore, North Sydney, the Northern Beaches and around the CBD, by opening up new express bus connections and adding capacity to existing corridors.

What community consultation has been undertaken?

The proposed reference design for Western Harbour Tunnel and Beaches Link was released on 26 July 2018, and extensive community engagement was undertaken through to 1 December 2018.

The engagement included 20 community information sessions that more than 2,600 people attended. In total, more than 7,300 items of feedback were received by the project team during the engagement phase.

The 2018 community engagement builds on the engagement carried out for the 2017 concept design in when more than 2,100 people attended 16 information sessions.

In early 2020, the Environmental Impact Statement for the Western Harbour Tunnel and Warringah Freeway was on exhibition for public consultation. 1,459 submissions were received, and of these submissions, 18 were from NSW Government agencies and local councils, and 1,441 from other organisations and members of the public.

To view the response to the submissions report, visit www.planningportal.nsw.gov.au/major-projects/project/10451.

Has active transport been integrated into the project?

Yes. The Western Harbour Tunnel and Beaches Link project will deliver over seven kilometres of new or upgraded cycleways and pedestrian paths.

What does the environmental assessment process involve?

As with any major transport infrastructure project, Western Harbour Tunnel and Beaches Link are subject to a rigorous and comprehensive environmental impact assessment.

This assessment examines all potential environmental and social impacts that may occur during the construction and operation of the projects and proposed mitigation measures to avoid, manage, or mitigate these impacts. This includes traffic, air quality, noise and vibration, spoil disposal, sediment management, Aboriginal and European heritage, flora, fauna and marine ecology, and sustainability.

There are two Environmental Impact Statements – one for Western Harbour Tunnel (including Warringah Freeway upgrade) and one for Beaches Link (including the Gore Hill Freeway connection). Each will address the Secretary’s Environmental Assessment Requirements (SEARs) issued in December 2017.

The environmental assessments are managed by the NSW Department of Planning, Industry and Environment. There was a public exhibition period for the Western Harbour Tunnel and Warringah Freeway in early 2020 and for the Beaches Link in early 2021.

The Environmental Impact Statements are reviewed by the Department of Planning, Industry and Environment, NSW Chief Scientist and Engineer, NSW Chief Health Officer, and independent reviewers before planning approval can be granted.